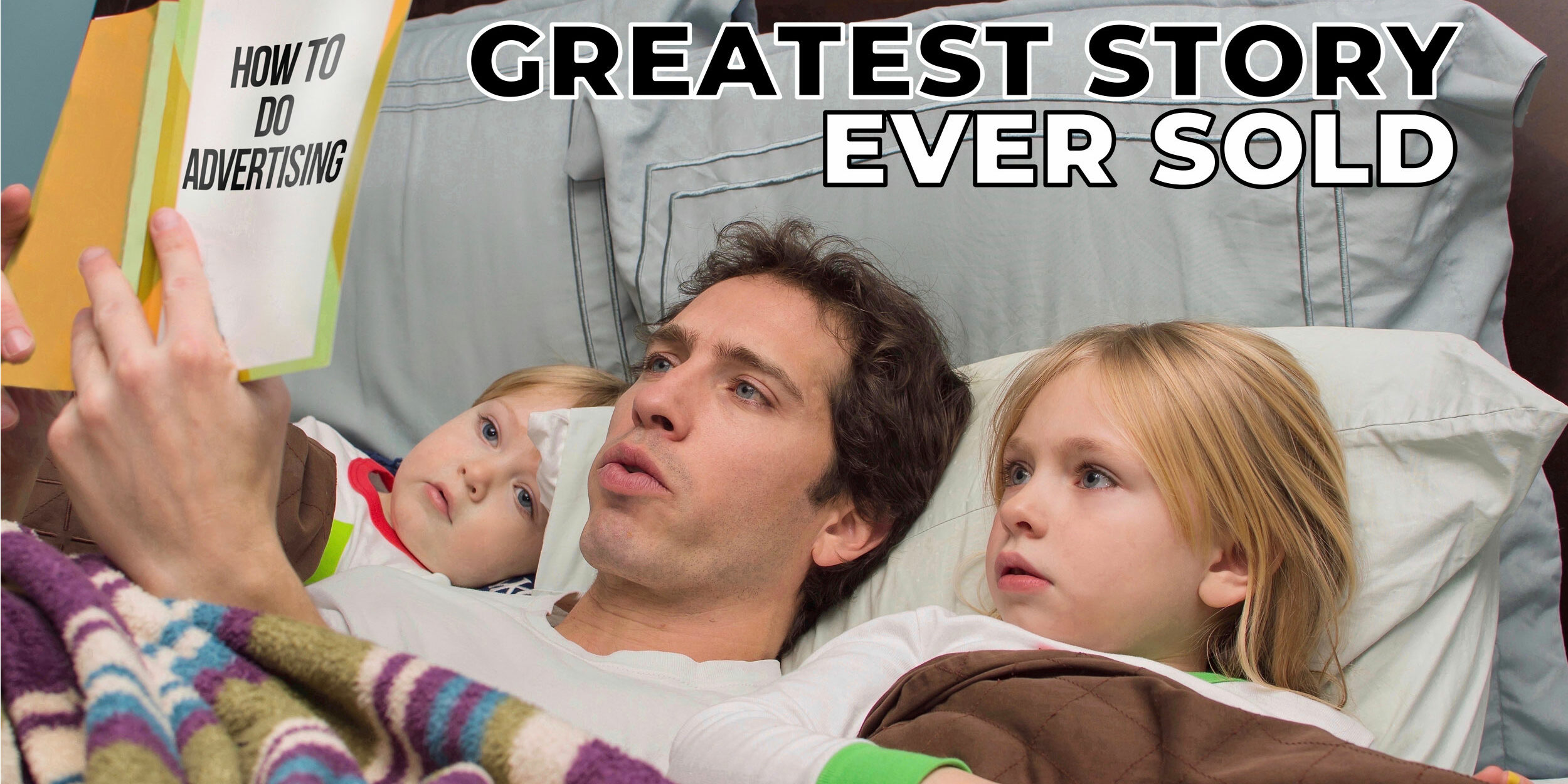 ONCE UPON A TIME…

DON’T LIE, some of your fondest memories are rooted in storytime. Maybe you were getting tucked into bed while mom recounted her favorite Disney movie. Or maybe you remember sitting criss-cross applesauce on the floor as your teacher recited the familiar pentameter of Dr. Suess as he tried to convince you to eat a clearly rotting breakfast with a goat on a boat in the rain.

You can’t fool us. You’re a sucker for a good story.

Apparently, we all are. All of us humans, at least. Dogs and pandas and marmots can’t be bothered to give a shit.

You’ll be happy to know that it’s not your fault. Not that we were blaming you – YET. But it’s nice to approach this sordid tale of mind control with a clear conscience.

You know how you’ll sometimes dream that you’re falling, and then suddenly wake up before you hit the ground? That’s because the vast majority of your genetic ancestry spent their nights snoozing in trees so that bears and buffaloes and wildebeests wouldn’t stomp them to death or murder them in their sleep. And you thought YOUR mattress sucked.

Storytelling is a lot like this. Back before TV and the Internet made people stupid, we were stupid by natural causes. It took thousands of years before people realized that they could just write stuff down so they wouldn’t forget it. Stuff like STORIES.

Up until then, stories were passed on as part of an oral tradition, which means something different than the “oral traditions” you’re probably thinking of, you pervert. Stories were simply told. And people, who had fuck all to do but look at the stars and have sex with monkeys, would sit and listen.

It was magical. It was entertainment. It was learning. It was pretty much all the culture people had, so you can see why it was so important.

Fast forward to today, and very little has changed. We may not look at the stars as much, but we still have plenty of sex with monkeys and we still can’t seem to get enough of our stories.

IS THERE A POINT TO THIS?

The point is that storytelling (and story listening) are thoroughly ingrained in our makeup. We can’t avoid it, even if we try. Just like that part of your knee that you can whack with a hammer and make you kick involuntarily, tell us a story and our reflex response is to listen.

So naturally, we must exploit this for the purposes of marketing. That’s also human nature (insert diabolical laughter here).

The advertising industry is fully aware of the power of storytelling, and predictably leans on it quite heavily. So much so that it’s almost impossible to find a TV commercial that doesn’t.

In most cases, it’s a blessing. Instead of having to hear about the sleep-inducing selling points of car insurance, you get to see an animated lizard wax poetic about pretending to travel the country, or cavemen experience various anachronistic shenanigans. You don’t want to hear about what a soda tastes like, but you relish that warm fuzzy you get from watching a penguin gift a cola to a baby polar bear.

If it sounds to you like you’re being sold on a story rather than a product or service, then HOORAY! Your reading comprehension skills are still intact. Give yourself a gold star!

Consumers – yourself and ourselves included – are far more likely to buy into a story than we are to buy into selling points and UVPs.

Why? Probably because you’re capable of doubting the truth of a marketing claim, but there’s nothing to doubt in a fictional story. You already know that it’s not a real lizard, you can’t really blame him for trying to sell you some car insurance.

But the power of storytelling is more than just letting you convince yourself that there’s some weird cartoon entity in a superhero suit trying to make your pizza soggy before it can be delivered. It can also be about “why.”

Not all storytelling is as overt as it needs to be for insurance TV spots. That’s because not all products or services are as dull and mind-numbing. After all, you know you need insurance because it’s required by law. You just have to pick which company, so the reasoning is that you’ll choose the one with the most memorable ads.

But when a product or service needs to explain its value to consumers, advertisers can’t just toss together a comedy sketch and call it a day. Consumers must be shown WHY they need the product/service.

Here, storytelling takes on a more finessed role. And your English teacher, who would remind you and other students to “show, don’t tell” is ultimately vindicated. You probably owe her an apology. She was right.

“Showing” the ways in which a product/service could allegedly benefit consumers is storytelling at its finest. And it can be extremely effective.

After all, if your ad shows a person trying to live a happy life and being impeded in doing so by one thing, and your product/service eliminates that thing, it allows consumers to come to the conclusion themselves that your product/service is worthwhile. You don’t have to tell them. It’s their idea, not yours.

It’s kind of like getting away with murder by convincing someone else that they need to kill your victim. Your hands remain clean. Nobody needs to doubt your veracity. Your story shows the need, your product/service becomes the solution, and your consumers do all the dirty work of connecting the dots for you.

And all you have to do is tell a story.

Other prescription medication spots do the same. They aren’t legally able to tell you that the drug they are advertising is going to help in any way, and you can’t buy it without a doctor telling you to. So the ads visually tell a story about someone using the medication while the voice-over describes how side effects may cause heart failure, stroke, or having your penis fall off.

Advertisers hope that you’ll pay more attention to the story than to the terrifying recitation of potential side-effects that they are legally obligated to read. Which is kind of weird, because the same voice-over is also telling you to “talk to your doctor about _____.”

It may be on par with the Wizard of Oz telling you not to pay any attention to the man behind the curtain, but it also illustrates exactly how much faith advertisers place in the power of storytelling.

And, if YOU are looking to promote or market a product/service for your own business, perhaps this little article will provide you some food for thought as well. After all, there may be plenty of advertising and marketing agencies out there, but there’s only ONE that tells a DAMN GOOD story. I’ll let you figure out for yourself which one that may be, and then you can live happily ever after.