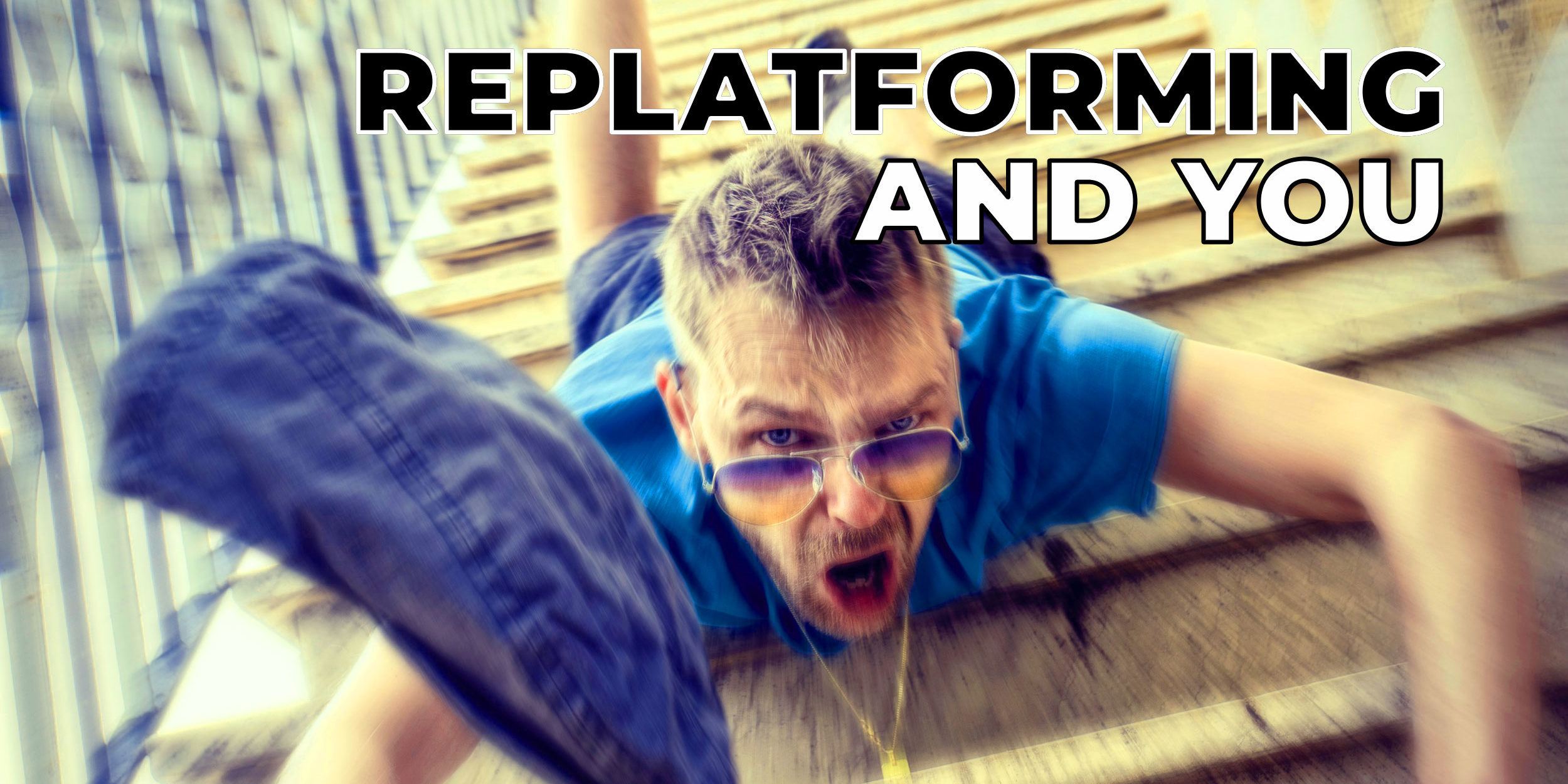 So, you think you’re ready to replatform?

It may make sense if you are adapting, growing and venturing into bigger and brighter territory. You may convince yourself that moving your legacy ecommerce engine to Shopify or trading those manual excel sheets for Hubspot automation is going to totally rock your world. Because, let’s be honest, what’s better than website leads automatically being added and tagged in your customer management system?

That was a rhetorical question. There are probably a lot of answers to that, so don’t get cocky. Especially not about replatforming.

You’ve got a lot of thinks to think about re: replatforming and what it really entails before you can expect a successful transition. So on to the listicle!

THINK #1:  Your Data is Probably Ugly

Everyone wants to believe that their data is worthy of a fashion magazine cover, but we’re being honest here. The tragic truth is that your data is probably a hot mess.

Don’t take it personally. But having tables with different numbers and/or types of columns is a disgrace. Nobody wants the old data that is no longer relevant but hasn’t been deleted or moved because you have some nostalgic attachment to it. All of your missing data, duplicate data, and misspellings are enough to make Bill Gates cough up a hairball. And don’t even talk to me if your ecommerce site has wrong quantities, outdated or missing product images, and last year’s COVID BLOWOUT prices.

THIS is “ugly data” and it makes me want to puke.

Okay, maybe not. But you’re going to need to do more than put a bag over your data’s head before subjecting a new platform to it. Really.

The first thing an agency is going to do in the process of replatforming is to evaluate your butt-ugly data versus the shiny happy data you need on the new platform. Do you need a place for leads? A place for products? If so, then what data do you want for each lead? Do you want Name, Email, SSN, EIN, Custom tags, or Kanye West’s phone number? And what parts of your current, fugly data is going to  be transferred to the new system?

This process is extremely important because machines are going to do the work, and they are as stupid as a bag of hammers. Every automation will be built on top of the data foundation you build. So if it sucks now, it’s going to suck even worse down the line when you decide that you actually want to split leads into two categories. If automations weren’t built for two categories. Everything will break and the world will end in flames.

You probably don’t want that.

SO CLEAN YOUR DAMN DATA!

No excuses. Get scrubbing! Get your tables in order. Align your rows and columns. Make your data current and clean and sparkly and be sure that what you have left is really the data you want to transfer over to the new platform. Don’t let the machines make a fool of you.

Of course, there will still be a need for your transitioning company to help shape this data because they will most likely find all the things you simply didn’t think about. Because of course they will. And the uglier your data is, the more heartbreaking, humiliating, and expensive that process will be.

THINK #2: Everything is Not Possible

New platforms today offer a vast amount of options. For instance, Shopify offers built in discount coupons and an open marketplace of plugins for a range of custom functionality. However, Shopify also has limits. For whatever reason, it only allows for one live automatic discount at a time. It’s a platform-specific limitation, and no amount of begging or pleading will change things. If you want to have two automatic discounts at a time, you will have to just suffer in silence.

As dark as it may sound, you’ll need to trust your agency.

When they tell you your replatforming desires may be “possible, but difficult,” what they are really trying to tell you is that making it happen the way you imagined in your optimistic froth is going to be more expensive than you want.

It’s not that they’re lazy or obstinate, or that they just enjoy crushing your dreams. Your agency is going to be your biggest ally in replatforming because they want the effort to be a success.

Sure, Hubspot can do live chats, lead automations, email campaigns, marketing, customer service tickets, analytics, and so on. But that doesn’t mean you should, or will, or can use all of these features. Whoa, there cowboy!

I can promise your budget won’t go as far as you think it will. It’s better to focus on one or two features the platform offers and implement those really, really, really – do I really have to keep saying “really?” – well. Trying to spread your energy into every possible feature at the surface level is just going to multiply mediocrity. You need a competitive advantage, not a shallow demo of your new platform’s features.

So, to reiterate, think long and hard about the specific features you want from a platform and refrain from saying “everything.” Because you’re not in a fantasy dreamland and your agency is going to roll their eyes at you and demand more money.

This SHOULD be a given, but experience has shown that it’s insanely easy for communications between a client and their agency to fall into a black abyss of nothingness. That’s not going to help you replatform.

Problems will arise. Technology demands it. So when you find one, let them know. And when they notify you of one, respond ASAP. Imagine that every minute you sit on an email will prolong your replatforming by a day. This may not be the case, but it’s probably closer to the truth than either of us would like to admit.

Generally, when an agency asks you a question, it means that they are in the process of working on your stuff at that moment, and may not be able to proceed until they hear back from you.

Time is money. And so is money. Don’t waste either.

THINK #4: It’s Going to Take Longer Than You Think

Not to pee in your Cheerios again, but there is a notable difference between doing something and doing something correctly. During a replatform, it is insanely easy for things to be overlooked. Simple things. Complex things. Things that you didn’t know existed that hide in dark shadows and eat small puppies that wander too near. It could mean changes down the road, or even worse, loss of your data.

There’s an old saying that “it’s better to measure twice and cut once than to just start cutting.” I’m not sure what it means or if it actually applies, but expect your REAL timeline to be a good bit longer than you’re expecting.

Most likely, your agency’s developer will be handling a lot of the custom integration work for your project, and who knows what they actually understand about your enterprise. Chances are, they don’t have a complete scope of the project, and are only being fed scraps of food and some specific very technical pieces of the project to work on.

When the developer runs into a problem, he can’t go ask someone for a solution. Not because he’s chained to the wall in the agency’s dungeon, although he probably is, but because he’s the ultimate source for the solution. It’s not a question of “should this be blue or pink,” but rather “why am I receiving a 404 when I use http POST to the Zapier endpoint?” Because that’s the kind of things developers wonder about.

What this means is that there could be problems that arise that simply take time to work through. There really is no way around this. If an unexpected problem does arise, it is a great time to practice patience and understanding. Remember, the developer has access to your source code.

Hey, replatforming is no small endeavor. Understand that, and work with your agency to get it done. Be part of the same team. Maybe you can go out for milkshakes afterward.

Oh, and don’t forget to hire a reputable, proven, and potentially DAMN GOOD agency to help you replatform. Hint, hint.