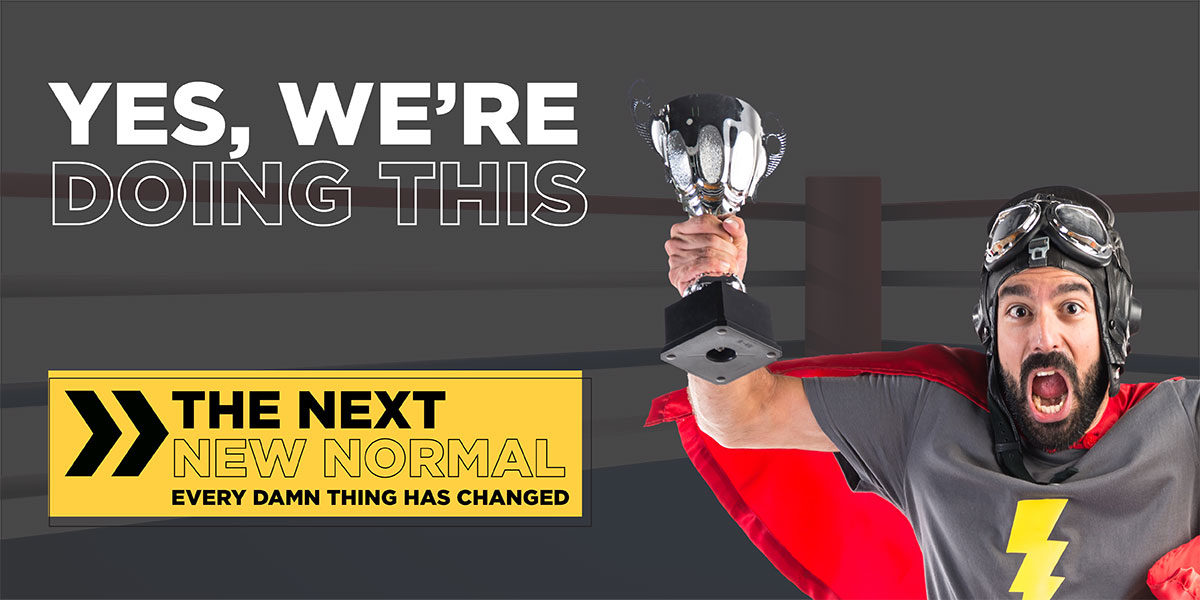 This is America, COVID or NOVID.

And that means we have an obligation to view everything as competitively as possible, even when it’s mind-blowingly inane to do so (“Take that, China, Italy, Russia, and everyone else, we’ve TOTALLY got you beat for COVID-19 cases! U-S-A, U-S-A!”).

It also means that we have to declare winners and losers in as granular a fashion as we can manage. I’m pretty sure it’s the law or something.

So, here we are, checking off the scorecards for the greatest health crisis of the modern age. Woo hoo.

Let’s start on a positive note, with a big fat WIN for the world of interior design. This entire industry is almost certain to get a huge boost, fueled by millions of people who can no longer stand the sight of the inside of their homes.

Even people who just completed a remodel are likely ready to wipe the slate clean and start again. Who knows when the next quarantine is going to happen, but it sure as hell better not happen with THOSE goddamn drapes.

The same can’t really be said for America’s favorite vehicle. While you’ve been sitting inside re-watching Tiger King for the third time, your car’s been out there in your driveway, watching its battery slowly drain electrical charge along with whatever hope it had left.

Your car may have missed you, but be honest. You haven’t missed traffic jams, red lights, long commutes, or that STUPID JERK who cut you off and definitely deserves to be fed to a pit of hungry snakes.

Not only has the automobile industry taken a giant hit from COVID-19, but even oil prices managed to fall so low that oil producers had to pay to give away barrels of crude. That’s not a joke, either.  That actually happened. Whoa.

As Americans, we treasure our freedom almost as much as we treasure convenience. Delivery of anything – whether it’s a parcel from Amazon or a pizza from that mafia-owned pizzeria that you love – has always been a big plus.

But now, fuhgeddaboudit! Lock us all down in our homes and those delivery men and women become HEROES! Champions of liberty boldly braving the COVID-infested wastelands to maintain your essential supply line. You may well have even ordered those electric sock warmers from Amazon just to see if the outside world was still there.

Few things, if any, have experienced the meteoric surge of inflation that college tuitions have. While previous generations were able to attend a semester for the cost of a jug of buttermilk and a few Bazooka Joe comic strips, today’s aspiring students are not so fortunate. They must either pony up the GDP of a small country or submit themselves to a lifetime of indentured servitude in a vain attempt to repay their student loan.

While this seemed to be (more or less) “okay” with everyone before, it stopped being okay really quickly once schools had to shutter their classrooms and every university suddenly became the University of Phoenix.

Looks like there are some hard lessons to be learned here. *rimshot*

As the first American survivors slowly began emerging from their front doors, one thing became very clear: where all the ice cream at the grocery store had gone.

The food that once inhabited all of those bare shelves definitely went SOMEWHERE, mostly to thighs and hips and waistlines. Stress-eating Americans everywhere have come to recognize two important facts. One; that Netflix is not actually an exercise program, even if you’re only watching action movies, and two; that the “19” in “COVID-19” does not stand for how many pounds you’re allowed to put on in quarantine.

Sure, you could have spent your time in lockdown doing squats and jumping jacks, but then nobody would believe you were sheltering-in-place. “Look how thin he is, HE MUST HAVE THE DISEASE!”

Expect an uptick in gym memberships that will dwarf the standard New Year’s spike for that industry. It will all work out. *rimshot*

There’s a reason why America has been steadily shipping its manufacturing jobs overseas over the past few decades. We just didn’t know what it was until now. You may have thought it was for higher profit margins, and while this is true, it turns out that it was actually ALL ABOUT protecting American workers from passing around killer diseases on a dirty factory floor. WHO KNEW?

Oddly enough, there are quite a few Americans who are very adamant about keeping manufacturing jobs here in the USA. Hopefully, COVID-19 will help disabuse them of that notion, allowing our poor, exploited workers to move on to selling essential oils online (or some other posh service sector career), and handing those jobs off like a relay baton to the poor, exploited workers of some other country where Americans no longer have to care about them.

It’s the American thing to do.

As we’ve already established, COVID-19 has slouched haphazardly across the American landscape, upheaving social norms and industries like a drunk guy trying to find his way to bed in the wrong apartment without turning the lights on.

Winners won. Losers, not so much. We’ve just scratched the surface, but you’ve got the picture. You can keep the 19 pounds as a memento.

DAMN, change can really be a bitch! Don’t let it get to you, though. It’s affected everyone. Your pals here at DAMN GOOD are more than happy to help you find the bright sides, the silver linings, and Waldo, wherever the hell he is. Give us a call. We promise we won’t infect you.

During the COVID-19 health crisis DAMN GOOD is doing its part to help support area businesses by offering free, no-commitment telephone consultations. Whether you use our services or not, we want to help your business survive and even THRIVE during this challenging time. No bloodletting required. Call us today at 561.266.0127