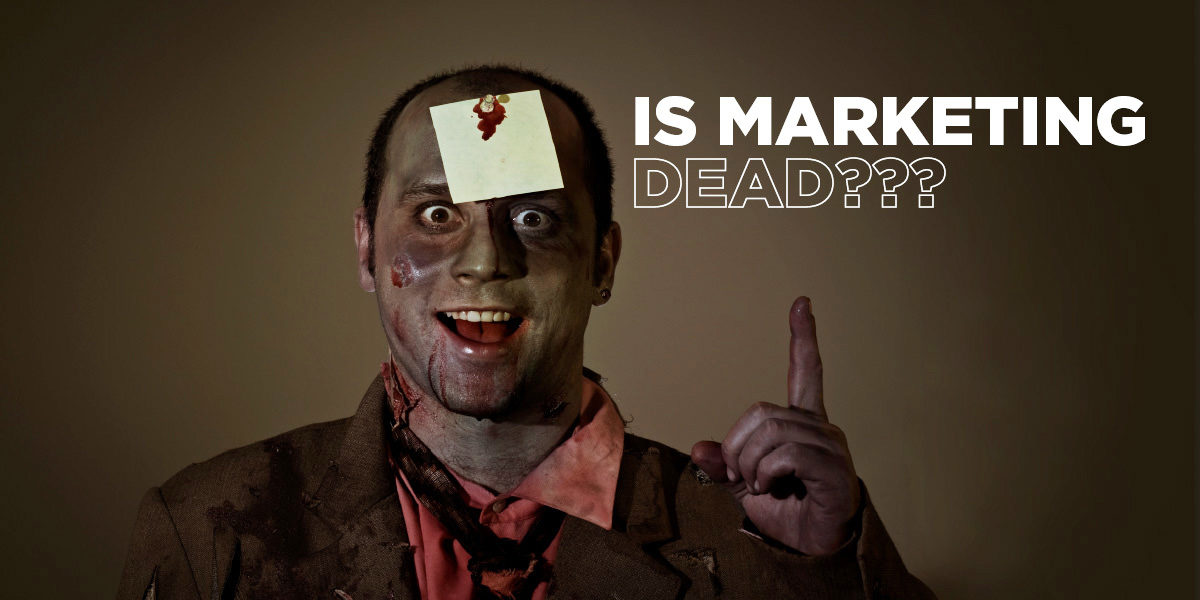 It seems like every few years pundits crawl out from under the rocks where they live to go all the way out on a limb and declare the death, or perhaps imminent demise, of marketing.

Why do they do this? Is it some sort of weird cicada-like mating ritual for pundits? Is there some sort of prize to be awarded to the first to declare something “dead?”

I’ll leave those philosophical questions to other pundits. They need to eat, too. But now that so much of society is scurrying out from under the rocks where it has been waiting out the COVID-19 pandemic, perhaps checking to see what is still alive is not such a bad idea. So, let’s discuss the status of marketing, whose rumored death may or may not have been greatly exaggerated.

There was a study that was published in 2011 by the industry analysis firm Fournaise which caused the Harvard Business Review to lose its shit and make the grand declaration that “Marketing is Dead,” albeit more than a year later. Apparently, it took them a while to notice, which, by the way, is not usually the case when something dies.

Apparently what set the Harvard Business Review off was the vast amount (73%) of CEOs who thought that marketers “lacked credibility” and were out of touch with business realities. That CEOs have disdain for marketers is nothing new, or even remotely surprising. After all, CEOs have basically one job, and that’s to make numbers go up. There’s no room for subtlety or the psychological “voodoo” of marketing. And it’s not just CEOs who have this disdain. When was the last time a CMO was promoted to the helm? Probably never.

Although Fournaise sounds like a great name for a sauce, its CEO survey did little but reveal what everyone already knew. CEOs don’t like spending money when they aren’t 100% certain what they will receive.

Or, to put it another way, people don’t understand how marketing works, and that scares them.

By the way, marketing still works

Astronomer Neil deGrasse Tyson said “The good thing about science is that it’s true whether or not you believe in it.” The same thing is true of marketing.

Let me try to illustrate the need for marketing.

Let’s say you’ve made athletic shoes. Without SOME form of marketing, nobody knows. You fail and die.

Let’s say you grudgingly decide to advertise them. You put up a sign that says: “Athletic Shoes available for purchase.” People walk right past your sign because you haven’t given them a reason to stop. You fail and die.

So, you decide you need to give consumers a reason to stop and consider your shoes. You add to your sign: “We know them to be high-quality.” Again, nobody cares as you fail and die.

Out of frustration you scrawl “STOP AND LOOK!” on your sign. Congratulations, you’ve discovered the CTA, or “call-to-action.” Consumers stop and look at your shoes, and then walk away without buying because they have no reason to trust you or your stupid sign. That’s why you need a brand, you realize as you fail and die for a final time.

This is basically how marketing works. It’s an art, just like baking a cookie. You need to put together the ingredients in the right order in order to get something edible. And the better your ingredients, the more refined your process, the better that damn cookie is gonna taste.

By the way, marketing is a science, too

Unfortunately, effective marketing is a LOT more complicated than creating a killer recipe for cookies or figuring what to put on a sign.

Even with a brand like “Swell Athletic Shoes,” you still have to consider that not everyone will walk by your little shoe stand. And of those that do, only some will even wear or buy athletic shoes. Perhaps you realize this when some savvy bastard sets up a stand near you with a sign that says “Really swell athletic shoes and more for people like you. Come and buy them.”

That’s right. Marketing is also about competition. That’s where the science comes in. Neil deGrasse would be SO proud.

You see, technology has paved the way for a new age of marketing. One that even grumpy CEOs can appreciate.

It starts with the Internet, where people go to look for cat videos and get tricked into buying other things through a process called “digital marketing.” Here in the digital realm, what can’t be quantified or codified in the real world is turned into raw data. And within that swirling pool of data lies the secret code to unlock a consumer’s desire to buy.

Okay, well, it’s not as sexy and mystical as that. Data is actually boring as shit. But what it can reveal is almost magic.

Imagine if a marketing company hired someone to follow you around all day. Every time you stopped to look at something, they would take notes. Day in, day out, your little marketing shadow is following you everywhere, learning everything there is to know about you. What you like, what you do, who you know, where you go, and how you buy.

That would be really expensive to do in the real world, not to mention creepy and probably illegal. But in the digital world, this is pretty much how data is collected. And when multiplied by millions of consumers, it creates a pretty clear picture of how to make consumers buy.

And here’s the science part. The picture created by data is NOT a formula for making sales. It’s a process. What that means is that if, oh, let’s say a global pandemic occurs and everyone’s buying habits are suddenly thrown higglety-pigglety, the data will adjust accordingly.

And if people decide athletic shoes are suddenly uncool, the data will discover it before anyone else does. So you don’t have to fail and die.

That doesn’t sound very “dead” to me

If anything, marketing is more alive than ever. And not just digital marketing. Traditional marketing elements such as branding and advertising and messaging are becoming increasingly validated by the same data. New technologies are constantly emerging, giving marketers new channels to reach consumers, and new tools and methods to sway them to buy.

And, of course, it’s not like the need to market is going anywhere, So don’t send flowers quite yet.

DAMN GOOD has been conjuring the dark arts of marketing for decades. Give us a call and let us help you manifest some killer ROI.